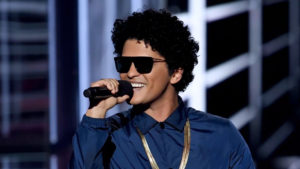 Peter Gene Hernandez is professionally known as “Bruno Mars” is a popular singer from Hawaii who has been topping the charts the last several years as he was once signed to the legendary Motown Records. After being dropped by the label, Mars signed a recording contract with Atlantic Records in 2009 and hasn’t looked back since!

Mars amassed his fortune through the combination of producing for others such as Adam Levine, Brandy, Sean Kingston, and Flo Rida as well as for himself with his former production team, The Smeezingtons (Mars, Ari Levine, and Philip Lawrence). They found instant success with Bobby Ray Simmons Jr. aka B.o.B.’s “Nothin’ on You”, and Goodie Mob’s former rapper turned singer Thomas DeCarlo Callaway aka CeeLo Green with his hit single “F*** You.”

Mars also found immediate success with his Atlantic Records’ debut single, ‘Just The Way You Are’ from his album ‘Doo-Wops & Hooligans’ as the song reached number one on the Billboard Hot 100. Another song, “Grenade”, also topped the charts. Meanwhile, his second album, released in 2012, ‘Unorthodox Jukebox’ contained the single, ‘Locked Out of Heaven’ and it topped the Billboard Hot 100 for over six weeks in 20 countries.

The Hawaiian singer has invested in the NJOY Electronic Cigarette Company, helped launched the “Selvarey Rum” brand, was endorsed by Pepsi and invested in Chromatik. Mars started the Bruno Mars Scholarship Fund with the Hawaii Community Foundation, to help kids from Hawaii with tuition fees.

Mars has sold over 130 million records worldwide, which makes him one of the best selling artists of all time. He constantly stays on the road performing as Billboard named the singer’s tour the fourth highest-grossing of 2018, tallying more than $237 million for 100 shows. Earlier this year, Mars announced that he would venture to Sin City to play series of select dates at the Park MGM in Las Vegas.